skip to main | skip to sidebar

By Leah Defigueiredo and Emerald Yumang

Analysis: Factories vs. Plantations in the civil War 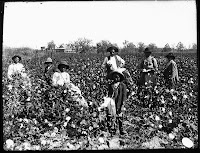 Factories vs. Plantations
The South had been extremely dependent on their cotton exports to keep their economy afloat. Cotton was a prosperous product, however, relying on one export was extremely disadvanteagous to the South. The North produced a variety of items in their factories. Their exports included textiles and weapons. The North was able to produce their own weapons during the war, which proved beneficial. Ultimately, the North's strong industry and factory proved victorious and helped them win the war. The South's planter aristocracy was not versatile enough to hold up Southern economy.
-Leah Defigueiredo
http://edsitement.neh.gov/lesson-plan/factory-vs-plantation-north-and-south
Posted by Northern Factory Worker at 4:43 PM

Northern Factory Worker
How did factories in the North affect the people? How did it affect the area? What changed?