skip to main | skip to sidebar

By Leah Defigueiredo and Emerald Yumang

Analysis: The North after the Civil war 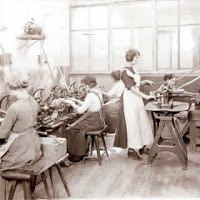 While the South Economy was completely destroyed after the civil war, the Northern factories were still a central part of their economy. The North did not face the same devestation the South did. Their economy was still completely intact. They continued to produce items in factories and export them to different countries. They used their exports as a tool to gain money to rebuild areas that had been destroyed.
-Leah Defigueiredo
http://www.cs.unm.edu/~sergiy/amhistory/ch22.html
Posted by Northern Factory Worker at 5:11 PM

Northern Factory Worker
How did factories in the North affect the people? How did it affect the area? What changed?